South Korea/United Kingdom – LG Chem will make a full-fledged entry into the chemical recycling business in order to build a plastics circular economy.

LG Chem will build South Korea’s first and only hydrothermal plastics recycling facility, which will use supercritical water. Supercritical water is a type of chemical recycling technology that converts mixed plastic streams into fossil-replacement oils and chemicals, allowing plastic waste to be recycled into new plastics and other products. Unlike technologies that apply heat directly to the reactor, it suppresses char formation during pyrolysis, so there is no expected limit to continuous operation.

LG Chem will work with Mura Technology (Mura), a UK-based company that has HydroPRT (Hydrothermal Plastic Recycling Technology), a proprietary chemical recycling technology that uses supercritical water. To strengthen the value chain in the chemical recycling sector, LG Chem has become an investor in Mura and a licensee of the plastic recycling process. KBR, Mura’s global licensing and engineering partner, recently awarded LG Chem a contract for a technology license and basic engineering package.

LG Chem’s hydrothermal plastics recycle facility is expected to produce up to 20,000 tons of liquid product per year. Because more than 80% of the plastic waste can be converted into renewable oils that can replace fossil fuels, its productivity will be among the highest in the industry. The remaining 20% of by-product gases can be reused as an energy source to power the relevant facilities.

LG Chem intends to review additional expansions once the recycle facility is fully operational by the first quarter of 2024, taking actual product verification and future market conditions into account. ​

According to the industry, the global chemical recycling market is expected to grow at a CAGR of more than 17% from 700,000 tons in 2020 to 3.3 million tons by 2030 in terms of pyrolysis oil extracted from plastic waste. 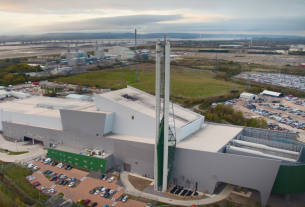